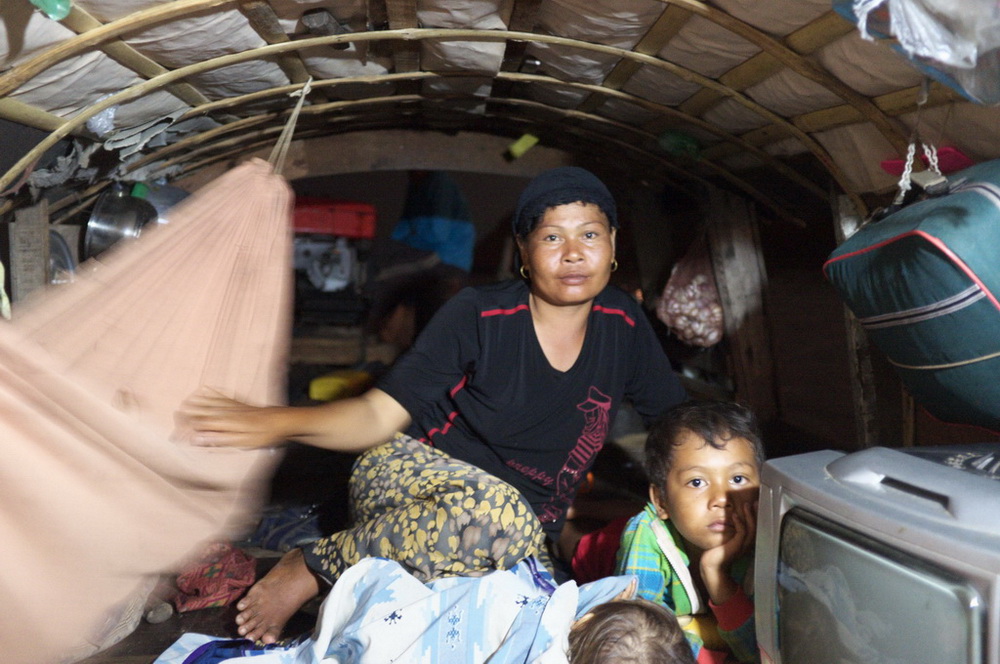 The confined space in which they were living was a tiny wooden long boat of a sort, 5 feet wide and 20 feet long at the most. At the back a tractor motor or some sort of old recycled engine was mounted, running an immensely long shaft into the murky water. It moved their home against the current but it also served as a generator, providing just enough electricity to run the small television set or the transistor radio when listening to the call for prayer. Mostly the load was a lightbulb, mounted in one of those cheap ceiling fixtures that you can buy at any hardware store, grid aligned so the children wouldn’t burn their fingers and frosted so the light wouldn’t blind their eyes. I used to see people on these boats every day, usually they just blended into the backdrop, either congregated in groups of 4-6 tied up in the middle of the river, gathered around a single television set at the stern of one of the boats – or silently dragging a fishing net along the concrete banks of the promenade, whilst children jumped in and out of the mud brown water of the Mekong river.

It was night when we got on. Tee Yom, sitting on the deck, sized me up, then sized up my companion, removed a plank from beside where she was sitting and started scooping out water from the hollow space underneath. I presume to make up for the extra weight of us boarding the tiny vessel. She smiled a bright smile and I smiled back feeling welcomed. My bicycle, lying flat, was wider than the deck and both myself and Drew, much taller than average, sat down and crossed our legs with our feet reaching over the side. Sonle, the father, a short and skinny man with a dark sun-worn face, pushed the boat away from the muddy bank and started the engine with a home-made string mechanism.

It was indeed a tropical night at its best, stars in a panorama setting, still hot and moist air and a backdrop of shimmering lights in the distance. The main strip alongside the river of Cambodia’s capital city Phnom Penh was alive at this time of the night. Bars and restaurants filled up with customers, most of them tourists or western foreigners living in the city, expats as they liked to call themselves. A well-known meeting point to socialise and network with other foreigners and affluent Cambodians, was the FCC. A French colonial setting offered 5 dollar cappuccinos and a nauseous sentiment of bourgeois superiority. For more than the average Cambodian earned in a day you could enjoy a mango smoothie whilst looking at the mighty Mekong River coming together with the equally deep and muddy Tonle Sap, flowing slowly all the way past Ho Chi Minh City in neighbouring Vietnam before reaching the South China Sea. Taking in the view, you might also be able to spot the slim longboats in the water, maybe even drift off to imagine the seemingly careless lives fishing, playing and lazing on their floating homes.

Tee Yom had eight year old Hanafi as the eldest, Lina was four and the youngest was Happiny. Nearly 2, she slept soundly in the hammock all the way, only uttering small squeaks when her mother stopped rocking her. Hanafi and I found a curiosity for each other. I would take a picture and hand over the camera, he would then look and almost smile, but eventually just hand the camera back and turn towards his mother – and then smile properly. Hanafi’s teeth were so rotten, in such a state, that he didn’t even want to open his mouth. He was eight and what could have been laughter was restrained to squelches of joy, hidden behind a sense of shame, fed by his peers as Tee Yom gently explained to us.

The crossing was long enough for me and Tee Yom to take a deep look into each other’s eyes and exchange silent heartbeats. In reality I don’t really know what it means, what I just wrote. But that’s what happened, right there and then, and I can’t think of better words to describe it. As we left the boat, I made sure we had a way of getting in touch with them again and I asked Drew to make this a priority, which he honourably committed to. Through the months that followed I would receive several updates.

When we boarded their tiny home, we knew it didn’t smell right. Contrary to common belief, people that don’t have the luxury of a running tap make an extraordinary effort to keep themselves and their homes clean. And when that’s not the case, it’s because their access to clean water is very limited or even non-existing. It was clear that Lina, lying in front of me on the floor was suffering from severe mal-nutrition. Her legs were very skinny and her stomach bloated. Thanks to Drew and the effort of Theany, his Cambodian wife, the family was able to see a doctor. The following are extracts from our correspondence.

“I was just thinking of you this weekend as the fishing family has been finally getting some help.  The mother went to the dentist again. The baby spent the weekend at the hospital (as well as the mother), and needs care for some time for malnutrition.  My doctor friend said that the liver (or kidneys?) shut down which causes the bloating like what we saw. I will now look for another NGO to take care of the baby. I think she needs an IV drip for a few months since her system can’t handle food quickly.  It is really hard for the family to be at the hospital. We bought them cookware and a mosquito net, gave them money for food and will buy them a big bag of rice. Apparently the mom needs to help dad with the fishing. The boy also was treated for an infection in his foot, from a fish bone that was lodged in there.  I hope they can get on top of things now.  Still lots of work to do.”

I am aware, through my work, that Tee Yom and Sonle and their family is just another story in a world becoming increasingly imbalanced by each day passing. I mean this in a spiritual way. I think it’s clear to most of us that we have collectively lost any sense of direction, that many of us are trying to reach through the deafening noise of greed and selfishness that we have allowed to devour our collective soul.

I return to a life in the West, increasingly deserted of compassion and where people’s notion of ‘freedom’ is abstract. I have no words to explain its lack of realism for the component of life that truly matter. The bloated egos and the emotional emptiness accompanying materialism is causing us to believe in an untenable self-image, where ‘freedom’ lacks the courage of showing, even to ourselves, the sides of us that are unacceptable. We cannot deny the actions that create happiness, and those actions will originate from our own personal sense of happiness, and freedom.

“Take someone who doesn’t keep score,
who’s not looking to be richer, or afraid of losing,
who has not the slightest interest,
even in his own personality.
He’s free.”

In meeting Tee Yom and her family, in meeting many others, living under similar or worse conditions, I understood that I wasn’t as free as I wanted to believe I was – and that there are lives, that I simply cannot imagine living. In the silent exchange of heartbeats, in the silent exchange of souls, I have found that the only way for me to be free, to find my state of mind calm in happiness, is to reciprocate the kindness, benevolence and freedom I encounter in the lives I meet. Lives in my everyday life, those shared through my writing and journeys in the time I am alive. 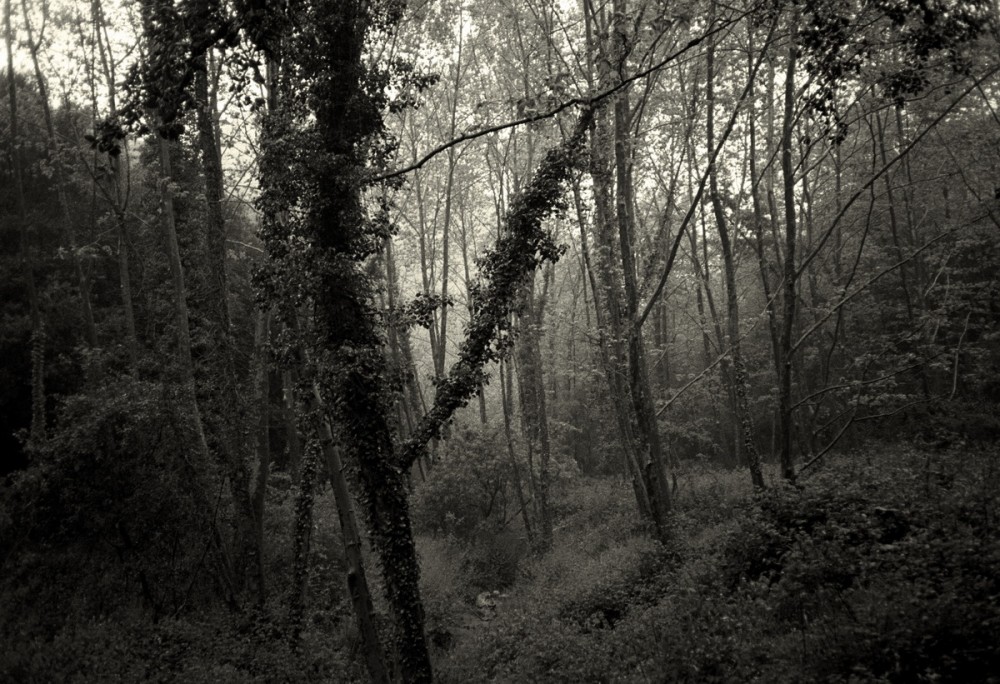 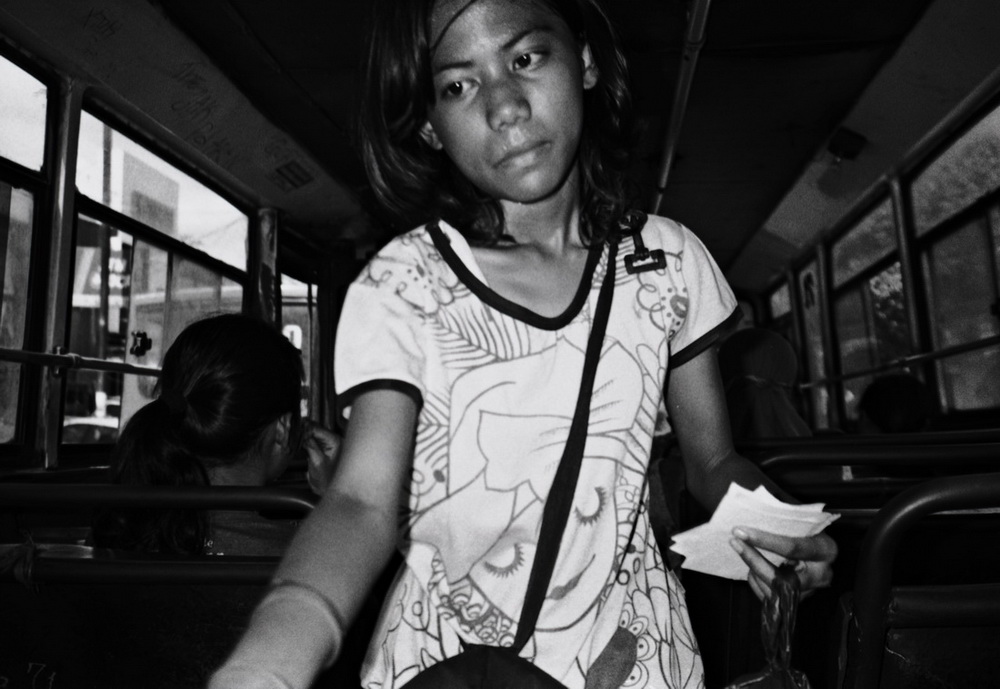 The End Of MindZoom